MYANMAR SEA TRADE AT US$21.6 BILLION 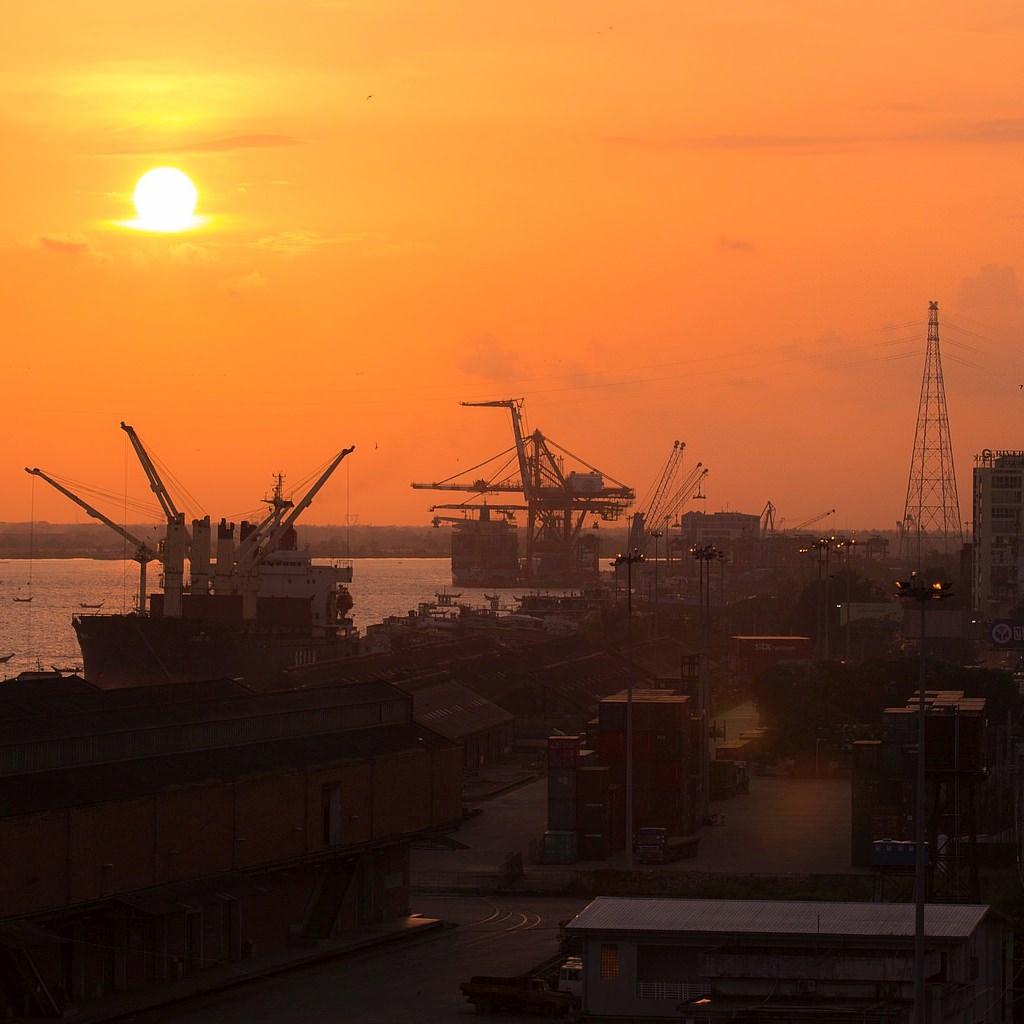 THAI COMPANY TO DEVELOP SMART AND ECO CITY IN YANGON

Thai’s largest industrial estate developer, Amata Corporation Pcl (“Amata”) has signed a framework agreement with the Myanmar government for the development of a smart and eco city in Yangon and the supporting infrastructure, logistics, services and other related businesses.  The 2,000-acre industrial estate will be developed by Amata’s subsidiary Yangon Amata Smart and Eco City (“YASEC”) in cooperation with Myanmar’s Department of Urban and Housing Development (“DUHD”).  DUHD will hold 20% interests in the project.  It is expected that a joint venture agreement will be entered soon.  The chairman of Amata, Vikrom Kromadit, stated that the company would bring advanced technology and interested investors to Myanmar and ensure that any investment would be sustainable and environmentally appropriate for local communities.  Amata has over 1,300 factories employing over 300,000 people, and pays over US$500 million tax to the Royal Thai government annually.  Construction of the first phase in the East Dagon township of Yangon will commence once the Myanmar Investment Commission (“MIC”) grants the permit and the rainy season ends.  It is expected that the first phase of the project will attract US$1 billion in FDI inflow and generate at least $60 million in tax, as well as create almost 30,000 jobs.  According to Vikrom, Thai’s largest company, PTT Co, is interested in establishing a 600-megawatt power plant to supply natural gas in Yangon, and providing gas to Yangon to meet its future needs.  Vikrom is positive that Myanmar could benefit from geopolitical issues such as the U.S.-China trade war which has resulted in international companies leaving China.  It is expected that Myanmar’s first sustainable eco city will be considerably larger than the Thilawa Special Economic Zone (“SEZ”). (Source: https://elevenmyanmar.com/news/amata-corporation-to-develop-a-smart-city-in-yangon, 24 August 2019)

Myanmar’s government is proposing to increase import licensing fees in light of the nation’s developing economic conditions.  Under the proposed new fee structure, licensing fees will increase from the present rates between K250 and K50,000 to rates between K30,000 and K90,000.  According to Ministry of Commerce (“MOC”) deputy minister U Aung Htoo who proposed the new import licensing fee structure, the new fee structure has been reported to the Economic Committee of the Union Government.  It is unclear as to whether this fee structure will be implemented, however U Aung Htoo stated that the existing fee structure should be reviewed because it is not compatible with Myanmar’s economic conditions.  The MOC had projected revenue of K4.167 billion for the 2017-2018 fiscal year, but had collected of K3.854 billion as of 18 August 2019.  The number of goods requiring a license for import has decreased from 4,818 to 4,613 in 2019.  Since the end of the 2017-2018 fiscal year, imports have been decreasing quarter-on-quarter.  Almost 90% of imports are from China, Singapore, Thailand, Japan, Malaysia, India, Indonesia, US, Vietnam and South Korea.  Myanmar’s top ten imports in 2018, which constituted 57.4% of all imports for the year, were mineral fuels including oil, electrical machinery and equipment, computer parts, vehicles, iron and steel, plastics and plastic products, iron and steel products, animal and vegetable byproducts, man-made filaments, and fabric.  In 2018, the total value of imports amounted to US$24.2 billion. (Source: https://www.mmtimes.com/news/government-proposes-raise-import-licensing-fees.html, 28 August 2019)

Myanmar is engaging in various regional connectivity projects in order to enhance bilateral relations with neighbouring states as well as encourage investment and trade.  In a video message at the Myanmar Insight 2019 forum in Bangkok, Daw Aung San Suu Kyi stated that Myanmar has implemented significant economic, political and social reforms with the aim of creating new investor opportunities, including from Thailand.  The Myanmar Investment Promotion Plan was established to attain “dynamic, harmonious and inclusive growth while creating a more equitable and prosperous society through the promotion of responsible, quality investment”.  Daw Aung San Suu Kyi stated that as Myanmar’s economy transitions to a market economy, the rule of law “must serve as a foundation for an inclusive and vibrant society that safeguards the rights and interests of all our people”.  According to Daw Aung San Suu Kyi, licences will soon be issued by Myanmar and Thailand to logistics companies for the transportation of goods through the Yangon (Thilawa) to Myawaddy-Mae Sot to Bangkok (Laem Chabang) route, which will facilitate connectivity and relations between the two economies.  The Minister of Investment and Foreign Economic Relations U Thaung stated that Myanmar is “amongst the fastest growing economies, in one of the fastest growing regions in the world today” with GDP increasing from US$8.9 billion in 2000 to over US$71 billion in 2018 and is expected to grow at an average rate of 7% annually from 2019 to 2023.  According to U Thaung, this progress is expected to be sustained through significant investments in transportation, infrastructure, and urban development and connectivity, as well as improvements to Myanmar’s investment environment and a range of recent investment liberalisation measures.  U Thaung noted that Myanmar presented Thailand’s automotive industry with significant expansion opportunities, and that 15 Thai companies have invested in Thilawa SEZ.  U Myo Khaing Oo, director of Directorate of Investment and Company Administration, stated that Thai investors may lease land at industrial zones in Yangon for establishing factories.  Thailand is Myanmar’s third-largest trading partner, with trade between the two economies amounting to US$11 billion in the 2017-2018 fiscal year.  Thailand is also Myanmar’s fourth-largest investor, and Thai investment in Myanmar amounted to US$6.6 billion in the 2018-2019 fiscal year, with half of the investment in the oil and gas industry. (Source: https://www.mmtimes.com/news/myanmar-woos-thai-investors-bangkok.html, 28 August 2019)

In recent years, there has been a slowdown in sales of residential properties.  According to various real estate agents in Myanmar, any market support can be noticeable, especially throughout the rainy months during which Buddhist Lent takes place.  During the rainy months, foreigners constitute most rentals for both residential and office space.  According to one real estate agent, Ko Phyo Thu Aung of Paradise Real Estate Agency, locals prefer to buy properties during the rainy months, however his agency did not make any sales during the Buddhist Lent season.  Foreigners and locals generally prefer to rent in different areas – foreigners favour Kamayut and Yankin townships close to downtown Yangon and locals favour Thaketa and South Okkalapa townships.  Further, according to Estate Myanmar’s U Htoo Myat Naing, foreigners generally prefer apartments with rental prices between K456,000 (US$300) and K760,000 (US$500) per month, and there has been a slowdown of apartments with lower monthly rentals between K200,000 and K500,000 compared to 2018.  U Htoo Myat Naing also stated that residential property prices have decreased by 10%-20%, and that condominiums’ sales have weakened with new condominiums not being offered in the market.  Previous reports have indicated that property transaction have decreased by 50% in comparison to five years ago, with any  market growth stalled by a shortage of affordable housing, taxation, foreign ownership restrictions and weaker FDI flows.  Market commentators consider that increased interest in property can be facilitated through continued economic reforms and the implementation of legislation including the Condominium Law 2016 and Condominium Rules 2017.  (Source: https://www.mmtimes.com/news/foreign-rentals-crucial-property-market-during-rainy-months.html, 26 August 2019)

smart and eco city in Yangon