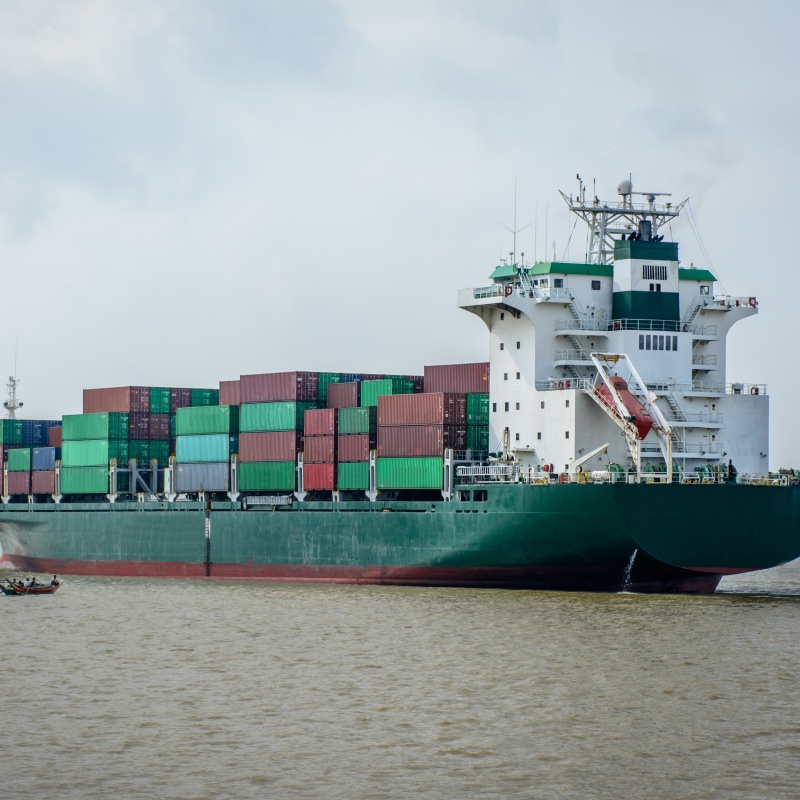 As of 10 July 2020, Myanmar’s trade with foreign countries through sea routes totalled over US$20.5 billion in the current fiscal year of 2019-2020, an increase of over US$1.5 billion as compared to the same period in the last fiscal year. Myanmar currently has nine ports engaged in maritime trade, with the Yangon Port being the main gateway.

Meanwhile, trade through border gates reached over US$8.6 billion, with total trade through land and sea routes amounting approximately US$29 billion.

On 16 July 2020, it was announced by the Ministry of Commerce that a total of 272 import and export companies have had their licenses temporarily suspended for one year, commencing 3 July 2020, owing to failures to deposit foreign currency earned from exports into local bank accounts in accordance with the Foreign Exchange Management Law.

Myanmar Government to Borrow from ADB

The Myanmar Government is proposing to ask Myanmar’s international development partners to fund the building of key infrastructure in Myanmar in the 2020-2021 fiscal year.

It was proposed by the Deputy Minister of Construction on 17 July 2020 that Myanmar should take a loan of US$483.8 million from the Asian Development Bank (ADB) to build the Bago-Kyaikhto highway, a project that will be a pivotal connector for Myanmar. An additional JPY 27.8 billion in funding will come from JICA if approved.  Construction can then begin in the new fiscal year and competition is anticipated to take a total of seven to eight years.

The Myanmar Government has approved ADB loans for other projects, including a US$180 million loan to install water pipelines to replace and upgrade the current sewage system at a reservoir in Yangon, of which provides around two thirds of Yangon’s water supply. It is anticipated that the upgrade will lead to improved water quality and contribute to the efforts to reduce waste and levels of environmental pollution. This project is expected to take a total of five years.

Meanwhile, the Deputy Minister for Electricity and Energy has asked for an additional US$171.3 million from the ADB to fund rural electricity projects, of which are set to benefit 2815 villages and around 400,300 households.

It was announced on 17 July 2020 by the Deputy Minister for Planning, Finance and Industry upon submission of the Union Tax Law (the Law) for the 2020-2021 fiscal year that the Law will include a variety of provisions aimed at supporting SMEs, including:

As the oil and gas sector, it was announced that terms and conditions for production sharing contracts would be amended to be more attractive to investors. Meanwhile, financial institutions are be allowed to deduct certain specified costs for tax purposes at rates to be prescribed by the CBM and the tax carryover period is to be extended from three years to five years.

The new bill is also set to include provisions to tackle tax evasion, with it being noted that the various tax rates, reliefs and exemptions will be clearly outlined in order to avoid uncertainties and inadvertent loopholes. This comes in addition to the repeal of the tax amnesty (introduced under the 2019 Union Tax Law) for Myanmar citizens with unassessed sources of income. From 1 October 2020, a 30% tax rate will, therefore, be levied on all unassessed sources of income.

As for tax revenue in the first six months of the 2019-2020 fiscal year, Myanmar collected more than K4 trillion, exceeding the Government’s initial projection of K3.2 trillion. Taxes on local products and domestic consumption accounted for K2 trillion (0.4 trillion more than the initial estimate), commercial taxes totalled K1.05 trillion (up from the estimate of K779 billion) and a total of K129 billion was received from fees and taxes on vehicles, driving licences and business licences (also exceeding the estimates of K76 billion).

Payment of royalties owed to the State did not however meet the projected amount of K35 billion, instead totaling K9 million, mainly attributable to the postponement of gem emporiums owing to the global pandemic. Royalties from oil and gas extraction also failed to meet the expected amount of K234 billion, instead totaling K197 billion due to a production declines in Zawtika field and exchange rate losses.

Korea-Myanmar Industrial Complex to be established

The Korea-Myanmar Industrial Complex, the first South Korea-funded industrial complex in Myanmar, is set to be established on 556 acres of land in Hlegu Township in the Yangon Region, with construction expected to begin on Phase One in October 2020. Phase Two is set to commence in 2022 – 2024.

The project follows the signing of a Joint Agreement between the Myanmar Ministry of Construction and the Korea Land and Housing Corporation on 16 June 2017, under which it was agreed an industrial complex, with an estimated cost of around US$110 million, was to be jointly built. The Myanmar Investment Commission then approved the project on 27 February 2019.

Seoul-based Kyongdong Engineering Co., was awarded the contract to draw up the project design. The industrial park will be made up of three scale industrial plots, on which factories and warehouses for garment manufacturing, food manufacturing, jewellery processing, vehicle part manufacturing, and electronic parts will be constructed. The Industrial Complex will also host residential and commercial developments, a vocational training school and green spaces.

It is anticipated that the Industrial Complex will aid the development of the industrial, export and human resources sectors in Myanmar, not to mention the employment opportunities for some 50,000 to 100,000 local people and the US$10 million expected to be generated in taxes annually.

The project will also be mutually beneficially in terms of trade for Myanmar and Korea. Myanmar has already taken steps to boost the economic ties between the two countries, with for example offering a visa waiver for South Korean tourists. Meanwhile, over 200 South Korean companies, including Lotte Group, are already operating in Myanmar, with many Korean manufacturing companies showing interest in commencing operations in Myanmar.

South Korea is a crucial investment and trading partner for Myanmar, having so far injected nearly US$4 billion into 177 projects in Myanmar, with the majority of investment flowing into Myanmar’s oil and gas, infrastructure, retail and real estate sectors. Bilateral trade between the two countries totally almost US$660 million in the 2015-2016 financial year, rising to around US$800 million in the 2018-2019 financial year.

6,000 Factories and Workplaces Reopen in Yangon

With the worst of COVID seemingly passed, around 6,000 factories and workplaces in the Yangon Region have resumed their normal operations, with around 160 still closed, as according to the Factory and General Labour Laws Inspection Department. The Ministry of Health and Sports has urged the reopened factories and workplaces to follow the mandatory health guidelines to contain the spread of COVID and to date, the number of positive patients has been declining each day.

Sin Kyaing Company Limited is set to invest around K965 million cultivating and distributing tissue bananas at Seinman Bran Field of OSS Plot in Tarlawgyi Village-tract, Myitkyina Township, Kachin State, Kachin State Investment Committee confirmed on 7 July. The committee approved the company’s investment during its meeting in April, through which 117 jobs were created. According to Myanmar Investment Commission, Myitkyina Economic Zone and Kanpaikti Border Development Zone will be built as part of China’s Belt and Road Initiative (BRI). Union Minister for Commerce Dr Than Myint said Myitkyina Economic Zone will focus on agriculture and livestock breeding including manufacturing of value-added goods and freight transport. He said Myanmar has trade mainly with China as they share borders, adding that the development of Kanpaikti region will create local jobs and improve the regional economy. Blessed with natural resources and vast stretches of vacant land, Kachin State should invite capital and technology from China, the minister added.

On 24 July 2020, the Ministry of Electricity and Energy granted a Notice to Proceed in relation to the planned natural gas power plant in Yangon’s Thilawa SEZ, of which is the subject of a joint agreement between Myanmar and Japan. The Notice to Proceed gives the Marubeni, Sumitomo Corp. and Mitsui & Co. in conjunction with a Myanmar consortium (consisting of local conglomerate Eden Group) the green light to commence preliminary construction on the plant. It is estimated that the project will take 30 months to complete, with the plant thereafter providing a crucial energy supply to meet Myanmar’s growing demand.

In early 2018, similar agreements were issued for the first three liquefied natural gas (LNG) power plants in Myanmar, with tenders being awarded to Hong Kong’s VPower Group in October 2019. The three LNG plants, with a combined installed capacity of around 1000MW, are expected to generate the equivalent of around one-third of Myanmar’s existing energy capacity. To distribute the gas across Myanmar, a plan for a nationwide gas pipeline will be drawn out and implemented in phases.

Hong Kong has emerged as the largest investor in Myanmar with 41 Hong Kong-based firms deploying US$1.34 billion in investments in real estate, electricity, and garment businesses as at the end of the third quarter of the current financial year. Singapore closely follows Hong Kong with an estimated US$1 billion in investments in 13 projects. The investment was also sourced from Mainland China, South East Asia and Europe, with a total inflow of FDI of US44.3 billion over the period of October 2019 to June 2020.

The DICA intends to reach its FDI target of US$5.8 billion for the 2019-2020 financial year and infrastructure projects are already reportedly bringing large investments to Myanmar. Myanmar is also aiming to attract foreign investment by providing tax reliefs, incentives, enhancing investment opportunities, and investment approval processes.

The value of Myanmar’s iron and steel imports for the construction sector reached over US$893 million in the first eight months of the current fiscal year, according to data from the Ministry of Commerce.

Currently, Myanmar’s steel demand is estimated to be around 2.5 million tonnes per year, of which 92% is imported. Demand is projected to grow over the next decade, reaching 5.4 million tonnes by 2030, as according to the Myanmar Steel Association (MSA). Mainland China is the primary supplier for Myanmar’s steel market, with iron and steel also imported from India and South Korea.

Meanwhile, Myanmar is increasing its focus on domestic iron and steel production, with studies for the implementation of an iron and steel industrial zone project underway in the Ayeyawady and Taninthayi Regions and the Rakhine and Mon states. It is anticipated that the projects will commence within three to five years. The MSA is simultaneously developing industry standards aimed at fostering the growth of the domestic iron and steel sectors.

On 25 March 2020, the new Insolvency Law (the Law) came into force in Myanmar, providing for an effective liquidation or winding up procedure for businesses in financial distress. The new Law also introduced a corporate rescue and rehabilitation process. To date, however, there have been no reports of corporate insolvency or personal bankruptcy, as according to the DICA, the entity responsible for receiving reports for corporate dissolutions.

Myanmar Government to Borrow from ADB

Korea-Myanmar Industrial Complex to be established

6,000 Factories and Workplaces Reopen in Yangon